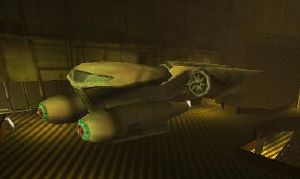 The Agent Shuttle outside City Hall.

Agent Shuttles are moderately sized transport ships used by agents in Carnivores Cityscape. The ships appear throughout various levels, but cannot be piloted in the game.

The shuttles are fairly large ships, but not near as large as other transport ships (such as DinoCorp VII). They are predominantly white, with blue tinted windshields serving as the only windows on the entire ship. The ships have two large engines, as well as two equally large thrusters with aerodynamic fins.

The ship's purpose is to transport an agent (or group of agents) to his destination as fast as possible. They can also transport supplies or refugees if the mission calls for it. 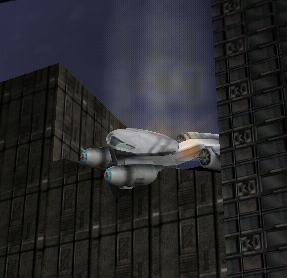 The crashed shuttle in Crater City.

A shuttle appears parked next to the player on the first level of the game, presumably having brought the agent to the starting location.

In the Crater City level, a shuttle appears parked outside of City Hall, very far from the starting location of that level. It is presumed to belong to the dead agents inside City Hall who failed to evacuate the Senator.

In the final level, a crashed shuttle is seen on top of one of the buildings in Crater City, just before the DinoHunt Chemical Complex gate.