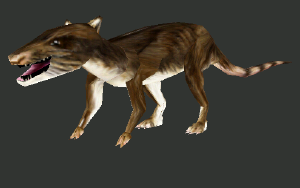 A model view of Alphadon.

Alphadon is a genus of small metetherian mammal distantly related to modern marsupials. Believed to be an omnivore, its prehistoric range included most of North America.

In Carnivores Cityscape it is commonly mistaken for a rat, but observation of the the games files reveals it to be Alphadon. In the game itself, it can found in almost all the areas. While it doesn't pose a threat to the player, it does have a strange habit of following him around to the point of walking in circles around him when he stands still. Even if it's not a threat, it can pose a threat to the player. If an Alphadon is next to the player, it will bite the player; thankfully, it's not a threat unless you are about to die. In the dinosaur campaign, they will often run to and eat dead agents on the ground after the player kills them, making whining sounds in the process.

On level one of Carnivores: Cityscape, when playing as agent, if you go in the lake, and push around by the rock under water, you will pop into a secret tunnel. If you keep going, you will encounter a room in which there is a statue of Serious Sam, and there are a few Alphadons around the statue that are stuck in their death animation, and appear to be bowing to the statue.