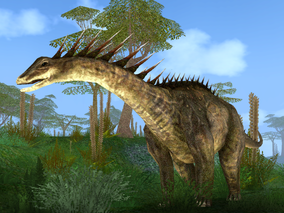 Amargasaurus as it appears in Carnivores: Dinosaur Hunter.

Amargasaurus is a sauropod from Argentina. It lived in the early Cretaceous, and had two large rows of spines aligning its back.

Amargasaurus was a new animal introduced to Carnivores: Dinosaur Hunter in the June 20, 2012 update. The Amargasaurus is also very fast for its size, making the speed versus mass issue with Stegosaurus seem minor in comparison. According to Tatem Games, it was originally supposed to be slower but was made faster for programming reasons.

It is a mostly unintelligent social herbivore, using its long neck to graze on ferns and shrubs and move in small groups. Amargasaurus shares the spot with Stegosaurus as the third largest animal on the planet, after the Mammoth and Brachiosaurus. However, Amargasaurus can weigh more than 15 tons and is easily comparable to Stegosaurus. It is so unique for having a tall row of spines along its backbone, although the Dinopedia mentions that the spines above the neck can be defense against tall carnivores, it is essentially harmless to the hunter. Unlike the Brachiosaurus which is known to spend most of its time on water, the Amargasaurus is largely terrestrial. Also, while Brachiosaurus hangs its relatively short tail close to the ground, Amargasaurus sticks its tail horizontally behind it. Despite its massive size, it is extremely shy and will flee if approached by predators; running surprisingly fast for its size.