"Basmachee Rocks" is the second area in Carnivores as well as the third and final area in Carnivores: Dinosaur Hunter HD and Carnivores: Dinosaur Hunter Reborn. This map is a great challenge for beginning hunters. The exact geographic origin of this island remains a mystery. Its unique topography of deserts, mountains, and lakes makes for a challenging area to hunt in. High hills can be a great place to perch in wait, or hide a dinosaur from sight. It has many interesting landmarks, many of which are often fatal traps or a good place to perch and shoot from.

"Basmachee Rocks" is filled with many landmarks that unwary players may fall victim to carnivores in. Its titular geography is common in the island in the shape of clay plateaus, mountains surrounded by moats, hills, craters, and a mountain range.

When beginning a new hunt, the dropship will drop the player off at one the following locations:

These locations are some of the points of interest in the island. DinoHunt Corp. would have most likely have chosen these locations in order to provide an interesting and unique hunt as provided by the landmarks. 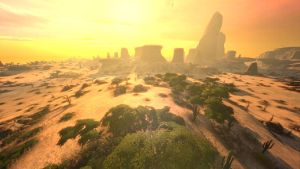 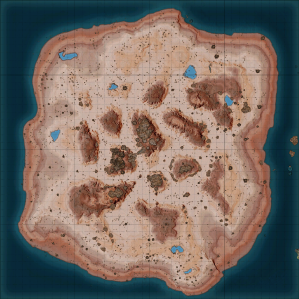 The topography of Basmachee Rocks in Carnivores Reborn.

"Basmachee Rocks" returns in Carnivores: Dinosaur Hunter HD and Carnivores: Dinosaur Hunter Reborn as the third and final area available to hunt. Like "Delphaeus Hills", there is almost no resemblance to the PC version of the island. This version of "Basmachee Rocks" is strictly desert, with many large rock formations jutting up from the arid ground. It is by far the most open area to hunt, and is perhaps the best area to hunt with the sniper rifle. Like the other areas, this island can be hunted at day, dusk, or during fog, with different dinosaurs available for each time.

Several images are known that appear to show a prototype version of "Basmachee Rocks", the most notable of which shows a floating bridge system that was removed from the final map (though some remnants were left in the map files).

Basmachee Rocks makes an appearance in both Carnivores Reloaded & its spiritual successor Carnivores+. Like the other areas that were featured in the first Carnivores game, it has been extended in both mods.

In Carnivores Reloaded, Basmachee Rocks is the second map players can unlock. There are many structures peppered throughout the extended areas. One area houses a tiny Tyrannosaurus temple, while another area contains pyramids, a Velociraptor temple similar to the one in The Ancient Temple & a toxic gas pit full of decaying dinosaur corpses. There is also a mountain range that contains two small isolated huts.

The most prominent feature of Reloaded's Basmachee Extended is a large square T-rex temple that can be seen from the overhead map. This temple has several brown T-rex statues looking out over the water, while the top of the temple contains 5 T-rex statues: Four brown ones at each corner & a purple-coloured one in the center. Red stains are present on the center statue, which may or may not be blood. There is also wooden ladders & scaffolding on the walls of the temple, presumably placed by DinoHunt Corp. to make exploration of the temple easier.

Another interesting feature of Basmachee Extended is the inclusion of the three-pronged bridge seen in some prototype screenshots, which connects some of the islands.

In Carnivores+, Basmachee Rocks is once again the second map to unlock & is very different from Reloaded's version. This version of Basmachee Extended goes for more natural landmarks as opposed to Reloaded's emphasis on human/Ancient structures. Each island in the extended areas is as varied as the original island, with lots of variation in the terrain.

The largest island, located near the center of the map, contains a large desert. In this desert, there is what appears to be either the molt or corpse of a Jaekelopterus, a reference to Mandibles. Within this island also sits a small T-rex temple, depicting a brown T-rex with green eyes. Hunters who have come across it have referred to it as "P. Rex".

Of course, Carnivores+'s Basmachee Extended also contains the famous three-pronged bridge, this time being found on the northernmost point of the largest island. Several other plank & log bridges can be found as well, connecting the largest island to the others.

In the upper-northeastern reaches of the map, there is a pyramid seemingly made out of water. This is actually an homage to a terrain glitch that created a similar water pyramid in the original Carnivores.

Perhaps the strangest landmark on Carnivores+'s Basmachee Extended has to be what some refer to as "Trash Island", which sits in the lower-southwestern reaches of the map. No dinosaurs spawn here & hunters are never dropped off here, forcing them to swim through Mosasaurus-infested waters. Once they reach this island, they encounter a bizarre sight: More than half of the island is covered in bags of trash, with some barbed wire, wooden Czech hedgehogs & barrels spread around. Next to a dilapidated solar panel, one can find a small shed made of scrap metal. Inside, there is a man sleeping soundly on a bed, along with a computer. Behind the shed & panel, there is a large purple T-rex statue. It can be assumed that DinoHunt Corp. uses this isolated island as a waste dump & the man was put there to supervise it.