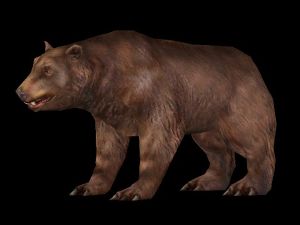 The bear, presumably like Earth's extinct Cave bear, is a large carnivorous animal that appears as a pointable creature in Carnivores Ice Age and Carnivores: Ice Age.

The bears found in FMM UV-32 resemble the bears found on Earth. Despite being labeled as extremely dangerous, the bear is a very shy predator, and it tends flee away from the hunter unless it gets cornered, forcing it to attack, making it a pain to hunt for clients. This make it one of the lesser aggressive creatures on the planet. It is highly advised to check your wind indicator and get your weapons ready when in proximity of this predator. The Yeti is known to mimic the bears' behavior and call, however this could also be the vice versa.

Being the second to last carnivore at 500 credits, the Bear is labeled as extremely dangerous because of it stats. However, it is known to flee from the hunter. The bear kills the player the same way the Smilodon does, by biting the player's right arm and smashing him on the ground.

In the mobile version, it is the fourteenth selectable animal, also unlocked at 500 points like on PC.