Brachiosaurus was a very large sauropod dinosaur. It was originally the largest animal in the Carnivores series, featured in Carnivores 2 and Carnivores: Dinosaur Hunter, and cannot be visibly killed. It is usually found in or very near water, eating aquatic plants.

The Brachiosaurus was originally thought to be the largest and heaviest known animal to ever walk FMM UV-32. This animal is so large that it is nearly unharmed when shot by the hunter. This massive animal is different from other large plant-eating Sauropods, as it possess longer forelegs than hind legs and spends a majority of its time in water, browsing on aquatic plants. FMM UV-32's larger variety of Spinosaurus, as seen in Carnivores: Dinosaur Hunter, is even larger than the Brachiosaurus. It rivals the Brachiosaurus in length; and the largest individuals are over two times heavier than a Brachiosaurus. Additionally, Amargasaurus occasionally grow to Brachiosaurus' size.

The Brachiosaurus can be killed, though trying without modding or using debug mode will only result in wasted ammunition, as its health is set in _RES.TXT to 1024. Even after it is finally killed, the animal will continue moving due to the lack of a death animation in its CAR file. Other effects of its death include: 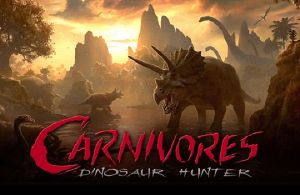 Title art from Carnivores: Dinosaur Hunter. Three Brachiosaurus are visible in the background to the right. 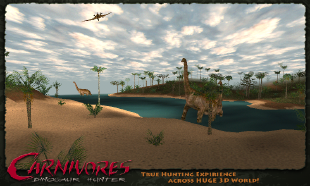 A Brachiosaurus trio in Manya Jungle