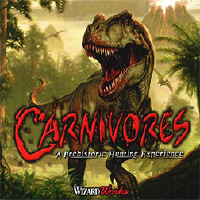 Carnivores (Хищники in Russian, and frequently shortened to Carn, Carn1, or C1) is a fantasy first-person shooter developed by Action Forms and released on November 30, 1998 for the PC. Carnivores, released shortly after WizardWorks Software's successful Deer Hunter, "proves itself more than 'just another Deer Hunter clone' by adding two major twists to the genre: allowing the hunter to hunt dinosaurs, and allowing the dinosaurs to hunt the hunter as well" as some critics say. The Carnivores 2 sequel gives slightly better graphics, a new format, more dinosaurs and weapons, brand new maps, and improved AI. Carnivores Ice Age offers a whole new take on the series with animals from the Ice Age and levels to fit the theme.

Gameplay in Carnivores doesn't follow a storyline; the player picks a weapon, a dinosaur, and a hunting area, and they hunt. This lack of plot is followed by Carnivores' two sequels as well. However, there is an "official" storyline behind the game:

On a routine exploration mission in 2190 A.D., science vessel FMM UV discovered a planet with suitable climate for humankind. During the initial scout expedition, this young planet, code-named FMM UV-32, was declared inhospitable for colony life, due to its unstable terrain and immense population of prehistoric reptiles. News of this amazing planet spread, and articles on the "Dinosaur Planet" lead an Earth corporation to purchase the rights to the planet and create DinoHunt Corp. DinoHunt creates the opportunity for paying customers to become dinosaur hunters for the first time in 50 million years. You are the newest client of DinoHunt Corp.

A slightly different version of this is provided in the Readme.txt file found in the game's base installation directory:

2190 AD. On a routine exploration mission, science vessel FMM UV discovered a planet with a suitable climate for humankind. During the initial scouting expedition this young planet, code-named FMM UV-32, was declared inhospitable for colony life due to its unstable terrain and immense population of prehistoric reptiles. News of this amazing planet spread and articles on the "Dinosaur Planet" lead an earth corporation to purchase the rights to the planet, and create DinoHunt Corp. DinoHunt created the unique opportunity for paying customers to become dinosaur hunters for the first time in 50 million years.
You are the newest client of DinoHunt Corp.

The source code given to the community includes a README.TXT file with a third version of this story:

While exploring the Universe, mankind has found the planet, code-named "FMM UV-32". Further surface and inhabitant exploration has disclosed that it was 50 millions years younger than Earth and was populated with prehistoric reptiles. A hunting company was established, giving customers a unique chance to become a dinosaur hunter.

You, the hunter, become a client of this company, and receive authorization to hunt for dinosaurs. You will receive besides a variety of weapons and ammunition recommended for a hunt. 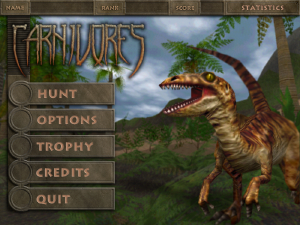 The main menu of Carnivores.

The gameplay of the original Carnivores remains constant throughout the series, with few changes. The game opens with a login screen, where users can make a new account or load a previous one. If creating a new account, they will be asked to read and approve a "waiver", stating that the player releases DinoHunt Corp. of responsibility in case the player is injured or killed (an interesting sidenote is that the player can't really be injured in any of the games - the closest the player can come is by staying underwater or walking through lava, in which a health bar pops up; when attacked by dinosaurs, however, any hit is instant death).

If accepted, the game proceeds to the main menu; declining exits the game. From the main menu, the player can view their hunting statistics, enter a hunt, view their trophies in the trophy room, change game settings, view the game's credits, or exit the game. In the hunt screen, you must pick a location, an animal to hunt, a weapon, and optional equipment. Choosing any equipment decreases the total amount of points you can get on any hunt by a set percentage, except for the tranquilizer, which increases the amount of points obtained. Information on each item is provided. In Carnivores, which dinosaurs, areas and weapons the player can choose depends on that player's rank.

After the player has selected their settings, they can hunt. During the hunt, the player is provided with an on-screen compass and wind direction indicator, which can be activated and deactivated with the Caps key. Sometimes the player spawns near a huntable animal, which is bad if the animal is a carnivore. The player can also draw weapons (with the number keys), look at the area map (Tab ↹), or use the binoculars (B). When a kill is made, the player's trophy is picked up by the dropship, unless tranquilizer mode is used. If the player is killed, all points and trophies earned in that hunt are lost. The player can choose to exit the hunt or respawn on the map anytime by pressing Esc+Y or Esc+R, respectively. If the player dies, he must choose to either exit or respawn. The player can be killed by drowning, burning in lava, or by being attacked, but not by falling (regardless of the height), so climbing mountains is an often-used strategy when hunting carnivores. 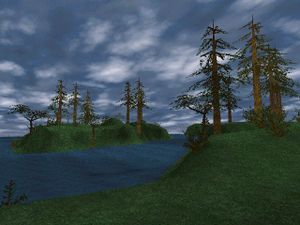 The earliest known screenshot of Carnivores.

Development on Carnivores was started around March 26, 1998,[1] six months after the release of Action Forms' first title, Chasm: The Rift. By March 27, a minimal set of system requirements was known (the mentioned image is shown to the right):[2]

Action Forms (the same Ukrainian lads who made Chasm) are now working on a new project called Carnivores.


Carnivoris - another 3D shooter. The action of which takes place in 2167, and you are a hunter of the dinosaurs on the planet very much like the Earth. The aim of the game is to shoot dinosaurs.
At the very beginning of the game you are assigned the rank of "beginner", which means that you do not yet have permission to shoot more dangerous denosaurs and can not use a new, more powerful weapon. But with the accumulation of experience you get more and more dangerous tasks ...
The developers promise a very high AI dinosaurs.
So far, nothing has been said about the game engine and only one screenshot is posted.
The game will support all major accelerators, 3d sound. Support over the Internet or LAN.
System requirements:
Pentium 200Mhz, 32 Mb RAM, 3D accelerator, 16 bit soun card

On April 21, an update and four new screenshots were posted.[3] The screenshots are apparently of an early version of "Basmachee Rocks"; three of them depict an Allosaurus in a default pose, and the fourth shows a floating bridge system that would later be removed.

An early version of the box art for Carnivores.

No further official builds, releases, patches, etc. are known (or likely) to exist.