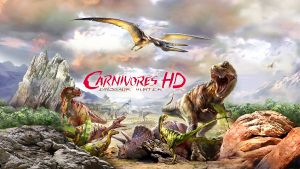 Carnivores: Dinosaur Hunter HD is a fantasy first-person shooter developed by Vogster Online and Tatem Games for the PlayStation 3 console. The game was announced on September 3, 2013 and released on the PlayStation Network one week later on September 10 for $12.99. On December 18, 2013, it was finally released in Europe, and an updated version was released on the American market. The game is a remake of the classic Carnivores hunting game released in 1998 for PC, and has received mixed reviews from critics and fans alike.

A PC revamp of the game distributed by Digital Dreams Entertainment and Tatem Games , Carnivores: Dinosaur Hunter Reborn, was released on Steam on May 27, 2015.

The storyline for Carnivores: Dinosaur Hunter HD is essentially the same as the previous incarnation of the game. The official website features a provides this basic storyline:

"In the near future advances in engineering made interstellar travel possible, bringing forth the era of space exploration. Along with many planets the mankind has discovered was a world very similar to Earth circa Jurassic period. The planet had a lot of islands populated with huge and wild animals, which supposedly looked just like Earth's long extinct dinosaurs. Soon enough exploration of the planet began. 'DinoHunt, Inc' was established, and the company started to provide hunting trips for everyone wealthy and bold enough to take on mighty creatures inhabiting the planet.

You are one of those hunters. The game brings you to an ancient environment and lets you hunt for the most dangerous and the strongest creatures in the universe. Get a hunting license, pack up your gear, choose an island to hunt and embark on the adventure of a lifetime!"

The gameplay is basically the same as the original games, while updated for its current platform with some new additions. Originally, killing dinosaurs would earn the player cash rewards, but after the most recent update the cash currency has been replaced with gems used for buying dinosaur licenses and equipment. Killing dinosaurs will also add points to the player's toal score, which allows more difficult areas to be unlocked.

Instead of having seperate forms of the mandatory equipment, the player is outfitted with a new piece of equipment called the Gadget . The Gadget contains a wind indicator (which blinks red when the player is detected by smell), a compass, binoculars , the dinosaur call , and the radar .

In Carnivores, a dropship would immediately come to retrieve a downed dinosaur. In Carnivores: Dinosaur Hunter HD, the player must walk up to the dinosaur to obtain points and call in the dropship to retrieve it. However, the carnivores can now eat the dinosaurs the player brings down, which denies any chance of the trophy being retrieved.

The killing animations of the dinosaurs have been removed, the screen now simply fades to black with a "Game Over" sign; and now all dinosaurs can kill the player.

Carnivores: Dinosaur Hunter HD has recieved mixed to negative reviews since its release. IGN has currently rated it 4/10, praising the majestic environments and realistic dinosaurs, but criticizing the very sluggish gameplay and lack of variety. The game's revelation and launch was highly controversial with the Carnivores fanbase, as many bemoaned the way the game lacked many of the key elements of the other entries in the Carnivores series.