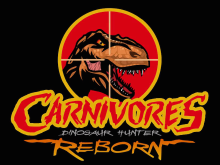 Being a port of Carnivores HD, Carnivores Reborn plays essentially the same as the aforementioned game. From the main menu, the player can begin a new hunt, visit the trophy gallery, check the leaderboards, customize the game through options, view the credits or exit the game.

Carnivores: Dinosaur Hunter Reborn has received much praise since it’s release on Steam. It currently has a “Very Positive” user review of 9/10. Players have praised realistic dinosaurs and locations, as well as the nostalgic feeling the game brings. It has, however, been criticized for its lack of content, buggy dinosaur AI and lack of difficulty.