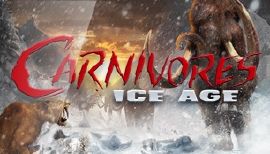 Carnivores: Ice Age is the sequel to Carnivores: Dinosaur Hunter, released for the iOS on February 8, 2011.[1] Like its predecessor, Carnivores: Ice Age is a re-release of the original PC game, and consists of the same gameplay. An Android version was also released in December 2012. A port for the PlayStation Portable and PlayStation 3 was developed by Beatshapers as a PSP mini, and was released on August 17, 2011,[2] and features an exclusive weapon.

Carnivores: Ice Age broke the top ten paid apps and became the top simulation game in the United States on February 19, 2011, less than two weeks after its iOS release.[3]

The gameplay of Carnivores: Ice Age is identical to Carnivores: Dinosaur Hunter. Originally, the iconic killing animations of the animals were removed, and the Yeti was completely absent. The Survive Mode from Dinosaur Hunter is also unavailable. Also, instead of the dropship picking up animals in the European PSP version, the prey immediately disappears after death. This was done in order to meet the PEGI 12+ rating requirements. [4]

Throughout 2011 and 2012, herbivorous animals once again became dangerous, and the Yeti was added. Also, the new Photo Camera was added, allowing the player to take photos of animals.

On July 19, 2013, two new animals, Hyaenodon and Indricotherium, were announced. They were added on November 26, 2013. On December 20, 2013, Doedicurus and Andrewsarchus were added as a surprise, as there were no announcement for Facebook pages.[5][6] A new update on April 18, 2014 revealed a new species, Titanis, otherwise known as a terror bird. Tatem's update notes stated that the new update included "Minor Improvements". This update occurred on the same day as the Carnivores: Dinosaur Hunter update, and similarly, portrays the Titanis on the navigation map as a "?", as did the Iguanodon on Carnivores: Dinosaur Hunter. Titanis was added as a selectable creature on August 14, 2014.

On December 21, 2014, a small update was released, in which a Revive feature was introduced to the game. If you are killed during a hunt, you can watch an ad to be revived and continue. This is a helpful feature because whenever you died, you would lose the points you earned during the hunt. However, it is known to be hard to find ad to watch.

On January 11, 2017, a large new update was released. The update added the Revolver as a new weapon, improved the graphics (which includes reflective water and a new skybox), new reload animations, increased movement speed, a revamped Night mode (without the use of Nightvision), a new Trophy Room design, improved UI, and fixed bugs. This update had already been added to Carnivores: Dinosaur Hunter a few months prior, but the Ice Age version has a couple differences. The buttons in Ice Age have changed to white to put it with the icy winter that the game is set in, and the Areas on the menu have an image of the map instead of a screenshot of a part of the area like in Dinosaur Hunter. However, in March 2018, Dinosaur Hunter did receive these new area menu icons.

The PlayStation Minis version features an exclusive weapon; the Laser rifle, which is the most powerful and expensive weapon in the franchise. This has yet to be added to the mobile ports, if it ever will be.