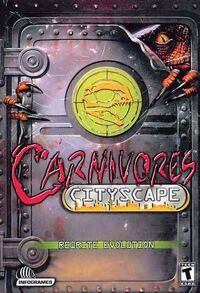 Carnivores Cityscape is the fourth installment in the fantasy hunting, first person shooter Carnivores series. It was developed by Infogrames and Sunstorm Interactive. However, since most fans and players were disappointed with the game, many refuse to count it as the fourth Carnivores game and set it apart from the original trilogy. The game takes place years after the discovery of the dinosaur planet. Interestingly, the dinosaurs in the game are much more anatomically correct than the ones in Carnivores and Carnivores 2.

Years after DinoHunt Corp. discovered their dinosaur planet, business in the hunting division has been severely reduced. Not many people want to hunt dinosaurs anymore, and the more interested clients have been, well.......eaten. So the company decides to bring the dinosaurs to the earth colonies as a traveling zoo to make some much needed profit and hopefully build some interest in the hunting division. After several successful trips, one of the dinosaur transport ships, DinoCorp VII, was overrun by its saurian occupants and crashed on the outskirts of a more remote earth colony. The player chooses between playing as an agent hired to eradicate the dinosaurs, or as a rampaging dinosaur bent on eating every living thing.

There are four levels in five locations, making 20 levels for each species. Gameplay consists of the player playing as an agent shooting dinosaurs, or as the dinosaurs killing off agents.

The agent gameplay begins in a park where the transport ship crashed. The agent makes his way to the ship while fending off packs of Coelophysus. Once he reaches the ship, he is contacted that there are possible survivors on board. He kills off Coelophysus and rescues two crewmen. Then, he is alerted that the ship's reactor is unstable, and he must deactivate it. Several Coelophysus and Oviraptor are attracted to the reactor's warmth, but are eliminated as the agent shuts down the reactor. The agent must then make his way out of the park and into the city, where he kills off more Coelophysus and a Nanotyrannus guarding the entrance to the city.

Once inside the city, the agent makes his way to city hall, infested with Coelophysus and Nanotyrannus, and rescues a trapped senator. The agent must then activate a large power generator chamber, crawling with Oviraptor. He does, and makes his way into the sewers.

Inside the sewers, the agent must fend off Coelophysus and Suchomimus, while rescuing two trapped workers, flooding the aqueducts, and making his way to the subway tunnels.

In the tunnels, the agent rescues a trapped repairman, Norton, who fixes a subway train that the agent must ride to get to a transporter that transports him back to the city.

Once in the slums, the agent must make his way to the DinoHunt Corp. traffic control gate, guarded by Suchomimus. After besting the beasts, he makes his way through overpasses and platforms crawling with every dinosaur accidentally released into the city, and finally makes it to the DinoHunt Chemical Complex. Once inside, he is warned that the complex contains a top-secret biological weapon stored in a tank. If the dinosaurs break the tank, the chemical will kill everything across the land. After fending off several marauding dinosaurs, the complex is secured, the dinosaurs eliminated, and the agent returns to base.

The dinosaur gameplay begins as a Coelophysus trying to make its way off the ship and into the park, surrounded by agents. The Coelophysus then finds itself back inside the ship, where it quickly becomes hungry and begins hunting the agents. After eating its fill, the dinosaur is in need of warmth and makes its way to the ship's reactor. The frightened and confused animal must then fight off more agents as it makes its way to the city.

Once in the city, the player becomes a Nanotyrannus making its way to city hall, killing agents along the way. The player then becomes a Coelophysus, banished to the outskirts of the city by a territorial Nanotyrannus as it eats the trapped senator, and an Oviraptor seeking warmth in the reactor room.

In the aqueducts, the player alternates between dinosaurs, including an adolescent Suchomimus defending its nest in the sewers from attacking agents. Another adult Suchomimus must escape its home as it floods, finding any food it can along the way.

The subway consists of the same dinosaurs, killing off humans.

The first four levels in the slums use dinosaurs seen before, but the on the final level, the player gets to play as the massive Giganotosaurus. The giganotosaur has been driven mad by the scent of pheromones leaking from a tank containing a dangerous biological weapon. Unaware of the danger, the crazed dinosaur attempts to break the tank. With the dinosaurs emerging victorious, it is unknown what happens following the incident, perhaps the prehistoric reptiles make Crater City their home and form a new ecosystem in its ruins.

Wilderness: A large park consisting of woods and the crashed ship. The only dinosaurs encountered here are Coelophysus, a few Oviraptors, and a Nanotyrannus as the boss.

City: Crater City, a remote earth colony, has been completly evacuated except for one senator trapped in city hall. It is overrun by all dinosaurs previously encountered.

Aqueducts: The underground sewers are very dark and crawling with Alphadon, previously encountered dinosaurs, and the dangerous Suchomimus.

Subway: The subway tunnels are also very dark and overrun with all previously encountered dinosaurs, just in more closed spaces.

Slums: The area around the DinoHunt Corp. Chemical Division is crawling with all previously encountered dinosaurs in much larger numbers, and the Giganotosaurus.

The game received mediocre/mixed reviews from many reviewers, getting a score of 6.5/10 from IGN, 5.2/10 from GameSpot, and 2/10 from PC Gamer. Nevertheless, it has attracted a small cult following.

Action Forms and their former employees tend to blame it for ending the original PC series. Igor Karev has stated in the past through his PR, Nadia Sydorenko that he does not want to make a failure like Cityscape.