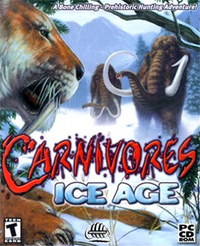 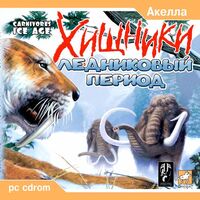 Carnivores Ice Age is the third installment in the Carnivores series. It was released for the PC on January 15, 2001, and an iOS remake was released February 8, 2011.

For the Ice Age sequel, the storyline is an addition to the original storyline. DinoHunt Corp. scientists discover Ice Age animals living in the Arctic regions of planet FMM UV-32 and they set up a separate hunting program for big game living there. It also features better gameplay and a new supply drop feature, which can be used once per hunt and refreshes the player's supplies. One more addition is the existence of a "secret animal" that can be unlocked by obtaining 1,000 points.

Carnivores 2 features a number of cheats, including all those provided in Carnivores. Cheats which are inherited from Carnivores require debug mode to be active.

Carnivores Ice Age was ported to iOS on February 7, 2011. The port has the same relocate feature as the Carnivores 2 port Carnivores: Dinosaur Hunter, but the Survive Mode is not featured. Also, like Dinosaur Hunter, the Double Ammo equipment was removed, but is still in the game as non-optional as every gun has as much ammo as the double ammo gave.

The mobile port features five new animals, a new weapon, a new Trophy Room, a new Night Mode (without the use of Nightvision), a Camera, and improved graphics.

The poacher is a scrapped ambient. He would have been the first NPC in the Carnivores series capable of shooting at the hunter, and the first ambient that could harm the hunter, but was removed sometime in production for unknown reasons. It is possible to re-add the poacher by editing _RES.TXT, but his unique AI was removed from the game's source, meaning he must use another animal's AI (usually the pig, though occasionally the Diatryma AI is used) and is not able to shoot the hunter.