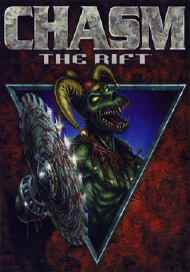 Chasm: The Rift (sometimes rendered as Chasm - The Rift, originally called Tron: The Hammer of War,[1] and called Chasm: The Shadow Zone during some of its development[2]) is the first game developed by Action Forms, and was published by WizardWorks for MS-DOS on September 30, 1997.

The player takes on the role of an unnamed Marine whose mission is to stop the so-called Time Strikers, the Timestrikers are an alien Faction attempting to over take Earth. Using military technology and energy leaks, they can invade different time epochs and must be stopped by the Marine. On his mission, he will visit places ranging from military bases in the present to Pharaonic tombs in ancient Egypt. All of the levels involve navigating through dark corridors, often like that of catacombs and crypts.

A notable features of the game was the ability to dismember limbs from enemies. Although bosses can't be killed by mere firepower but instead have to be brought down using special tactics.

The Military had already known about the existence of the Timestrikers, and had been closely monitoring them. However, they then believed that it was the Timestrikers causing massive energy leaks throughout the military bases causing rifts, allowing the Timestrikers to flood into our dimension. First attempting to take out a military installation, the Timestrikers mutated guards and soldiers, and added in their own forces as well. However they were pushed back by an unknown Marine, who then followed them back to Ancient Egypt, where it seemed that they would take over the world from the past. Failing again, they escaped the Medieval era, and after that, left only to come back to the present, again. There, the last of the Timestrikers were defeated, and the world saved.