Coelophysus (a misspelling of Coelophysis) is the most abundant and frequently encountered dinosaur in the agent campaign in Carnivores Cityscape. The Coelophysus was one of many animals chosen by DinoHunt Corp for their travelling zoo project, many were taken from their habitat and placed in cryogenic stasis until the ship carrying them crashed on Crater City, releasing the dormant dinosaurs and allowing them to invade the area.

The Coelophysus is most well known for being a pest during the Crater City Incident. The Coelophyus has a yellow body with black spots and a red head and neck, and also possesses small, white bristly feathers on its head and tail. They can hunt in packs just like a similar species, the Coelophysis. Because of their small size, they are rather very speedy, however this trait also makes them very weak to most weapons.

This dinosaur is the most abundant and frequently encountered dinosaur in the Agent's Campaign. They often swarm the agent and in later levels, their swarms are much greater in numbers. They are also the fastest as well as the weakest. Most weapons, except the pistol, will usually take them down in a few shots. The Grenade Launcher and X-Rifle are very affective as well due to splash damage. Killing one with a direct hit and either killing those nearby or severely wounding them. In the Dinosaur campaign, this is the first dinosaur you get to play as and is also one of the dinosaurs you play as most frequently. The speed and small size of this guy can make short work of agents just as long as Coelophysis isn't surrounded by Agents. About two Right mouse click slashes kill an agent. 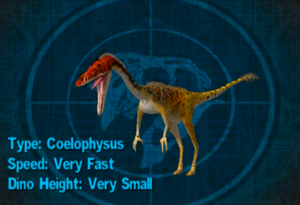