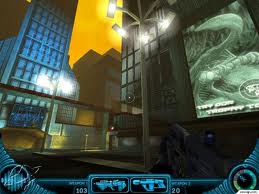 Crater City is the name of the city in Carnivores Cityscape. DinoHunt Corp. was planning to bring a traveling dinosaur zoo to different Earth colonies until DinoCorp VII crashed into the wilderness of Crater City. The dinosaurs from the ship escaped and infested the city. It is assumed the residents either died or escaped the city, as in the game it is abandoned. There are survivors that must be killed or saved, depending on which campaign is being played.