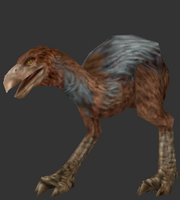 The Diatryma (now considered a junior synonym of Gastornis in modern paleontology) was a large omnivorous bird from the Eocene of North America. It is a pointable animal in Carnivores Ice Age and Carnivores: Ice Age.

The Diatryma is the second carnivore available to hunt in Carnivores Ice Age, and is the only pointable animal that is not a mammal. It behaves very similar to the Allosaurus and Velociraptor from Carnivores 2, such as jumping to attack its victims and eating their corpses instead of swinging them around in its mouth. But it is much similar to Spinosaurus as it has idle animations and uses the same AI, and unlike other animals, the Diatryma is not afraid to cross water.

The Diatryma is also the only creature in Carnivores Ice Age that the Observer Mode works effectively on. The Diatryma appears to be omnivorous to a small extent. While walking the Diatryma will occasionally stop and graze on what could be plants, fruits and seeds, and or insects. Its call sounds sound like a chilling eagle sound.