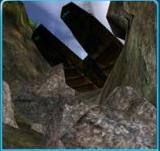 DinoCorp VII was a DinoHunt Corp. dropship that was used in transporting dinosaurs from the planet FMM UV-32 to Earth. Its pilots were overrun by the dinosaurs on the ship, and it crashed on the outskirts of Crater City, a remote Earth colony.

Like many dropships, DinoCorp VII was shaped rather like a "V" in the front. It was colored light orange with brown stripes, with several blue lights along the front. It suffered extensive damage upon crash landing, including a large opening in the side (probably where the dinosaurs exited) and even being torn in two.

The vast interior of DinoCorp VII was greatly suited for holding dinosaurs. All doors open either with hand-scanners or with motion sensors. The ship also has several small ventilation corridors, in which Coelophysis can easily travel. The ship's large navigation center features several computers and holographic maps, along with a globe. The ship has at least two elevators, the first of which goes from a ventilation room to the ships navigation center. The ship also has several dinosaur holding rooms (which are only large enough to hold a Nanotyrannus or juvenile Suchomimus) and several cryostasis tanks. 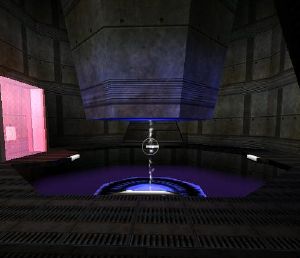 The back half of the wrecked ship contains the Reactor Room (accessible via second elevator), where the ship's radioactive reactor is held, attracting dinosaurs to its warmth.