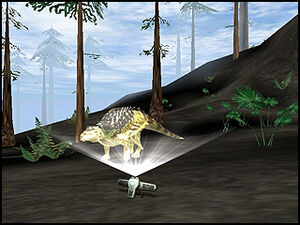 The Primal Prey call box calling and displaying a Gastonia.

The dinosaur call can be used as a free, albeit less accurate, alternative to the radar, since any animals of the same species as the call being used will answer if they hear the call, even if they are fleeing from the hunter.

In Carnivores: Dinosaur Hunter HD and Carnivores: Dinosaur Hunter Reborn, the dinosaur call is present under the name Dinosaur Decoy. This emits the call of the selected dinosaur to locate one on the M.I.S.T. device . Carnivores will be attracted to the call and come to the spot it was activated, so move to high ground or cover for an optimal shot once the call has been activated. Once used, the call has a 30 second cooldown period before it can be used again. The Dinosaur Decoy costs 150 gems to use, and will deduct 10% of the total points acquired on a hunt.