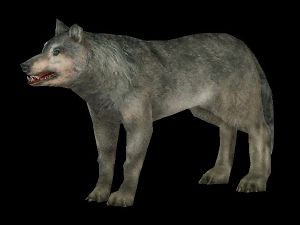 The wolf is an extinct member of the genus Canis (presumably Canis dirus, the dire wolf). It is a pointable animal in Carnivores Ice Age and Carnivores: Ice Age.

The wolf is the second most aggressive carnivore in Carnivores Ice Age, and is third animal available to hunt. It roams the landscape howling for its brethren, then attacks and tears any unlucky hunter to shreds.

The wolf's behavior is similar to that of the Velociraptor, Allosaurus, and Spinosaurus from Carnivores 2. However, much closer to the Spinosaurus because it has idle animation frames. The wolf will charge the hunter at close range swerving in a zigzag pattern similar to the smaller carnivores noted above, and will jump at the player with a loud bark when at close range. It kills the hunter by grabbing his right leg and shaking him violently by its mouth

Unlike the carnivorous dinosaurs noted above, the wolf has no sliding animation for making sharp turns. It has to do a U-turn to turn around. It may flee if it somehow misses pouncing on its target, and it scares easier than most other carnivores. Firing a DB Shotgun at close range will get it to charge, while a medium to long range shot will cause it to flee. The Smilodon behaves similarly to this.

The wolf is mostly the same in the mobile version, however there are some differences.

Originally, the wolf's AI was slightly different in the mobile version, Carnivores: Ice Age. In the game, the wolf would often ignore the hunter, and run around and bark playfully. When the hunter fired a gun and missed, the wolf would possibly charge the hunter like it would in the original game. It was actually not impossible to have the wolf stand less than an inch away from the player in the 1.0 version of the game, and it would ignore the hunter until they shot at it. Sometimes however, it would still attack the player and not play at all.

In an unknown update, the A.I was changed, and so the wolf will still attack the player at close range whether or not they fire their gun.