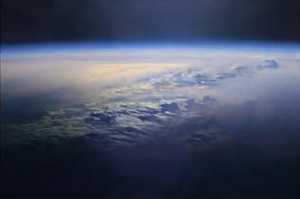 FMM UV-32 is an Earth-like planet discovered during a "routine exploration mission" by the science vessel FMM UV, captained by Turan Choks, in 2190 A.D., and is the planet on which Carnivores, Carnivores 2, Carnivores Ice Age, Carnivores: Dinosaur Hunter, and Carnivores: Ice Age are set. The planet was found to be populated by prehistoric reptiles and, later, Ice Age mammals.

Known to have been discovered during a "routine exploration mission" by the science vessel FMM UV, captained by Turan Choks, in 2190 A.D, the planet's designation, FMM UV-32, suggests that it is the thirty-second planet to be discovered by FMM UV, though no details on the 31 preceding planets—or any subsequently discovered planets—are known.﻿

Following its discovery and the subsequent scouting mission which discovered the dinosaurs living on its surface, news spread quickly, and articles on the "Dinosaur Planet" led the Earth corporation DinoHunt Corp. to buy the rights to the planet and start a dinosaur hunting business on the planet's surface.

The planet's overall topography is unknown, though from the areas available in each game, it can be reasonably assumed that the planet is mostly covered with water, with several archipelagos and perhaps one or two larger landmasses. It can also be assumed that its land topography is similar to that of Earth's. It has one known moon and seems to be in a single-star planetary system, but no details about the system or host star are known - it is not even certain that the planet is located in the Milky Way galaxy. The most detail given is that the planet is "young", with "unstable terrain".

Currently, little is known about the planets oceans. It is likely that they cover much of the planet and separate a majority of the known islands from each other. Inside these oceans exist aquatic plants, kelps, and corals. Although unseen, various species of fish, shellfish, and mollusks are said to be found in the planet's oceans.

Very few of the known animal species inhabit this enormous body of water. In fact, only two of the known inhabitants of the water live almost exclusively in it.

Known animals that live in or have close relations (for various reasons) to the ocean or any other body of water include:

It is likely however, that due to the planet's topography, almost all animals travel across the ocean to reach new land. This might also explain the fact that most animals on this planet are more solitary, while many of their prehistoric counterparts were more social. The relatively small landmasses probably cannot support large herds of animals. The fact that Allosaurus, Spinosaurus, Gallimimus, Moschops and Ankylosaurus are smaller than their fossil ancestors might be a case of insular dwarfism, while the abnormally large sizes of Ceratosaurus and Velociraptor are likely due to insular gigantism.

Based on what is known about the planet, the planet is likely geologically active. The various Volcanoes (including active, dormant, and extinct), lava cracks, and fissures point to this. Little is known about the planets internal structure besides the fact that magma must be close to the planet's crust and the planet's core produces a gravitational pull comparable, but stronger, than Earth's. The planet also seems to be subject to erosion similar to Earth, such as coastal and glacial erosion. Vengar Fjords is a prime example of these effects.

The planet's climate is suitable for human settlement, but it is not known what weather patterns it experiences, other than snow and a large amount of clouds and fog. The planet does however possess different forms of Biomes. Known Biomes include:

The wildlife of the planet is largely, if not entirely, composed of animals that also inhabited Earth in prehistoric times. The tropical regions seem to favour Mesozoic and Paleozoic life, while Pleistocene mammals are the main inhabitants of the polar regions. However, the mammals are not restricted to the polar regions and a few species, such as Alphadon, do inhabit the tropics where they are small, insignificant rodent-like omnivores similar to the mammals of Mesozoic Earth. Also, some areas appear to see seasonal changes in wildlife. For example, Ravaren's Bridge is home to dinosaurs and other reptiles in the summer, but Ice Age mammals inhabit the area during the winter. Animals known to inhabit the planet include: 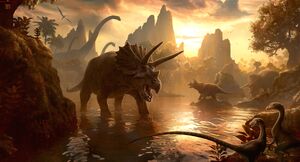 A Triceratops confronting a pair of Troodon.

A Smilodon confronting a mammoth.

A Megaloceros standing over a frozen river.

Ambient cries heard throughout all six games indicate that various bird and insect species dwell on the planet's surface as well, but remain unseen by human eyes. There are also various cries of large unknown animals that occasionally echo throughout some areas, such as the strange beast cry heard in many Carnivores Ice Age areas.

There are signs of prior sapient inhabitants on the planet. Human activity includes bridges, abandoned colonies and barriers, and scientific and military outposts. Previous inhabitant's activity includes pyramids, temples, and strange rock formations.