"Fort Ciskin" is a large marshy pine forest and the second area in Carnivores 2 and Carnivores: Dinosaur Hunter.

Although it is only the second area available to purchase, "Fort Ciskin" is one of the most unique islands. 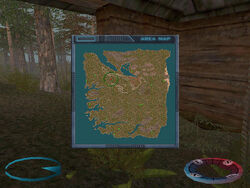 Inside the lonely hut (note the position in the map).

In the foggy forests to the northwest of the island lie an abandoned hut. It is highly useful for hiding, although it will not protect you from a charging T-Rex.

Directly underneath the water inlet to the north is a very thin, grazing beachhead surrounded by huge mountains.

Directly north from the beach across the waterway is a tunnel cut from the mountain. Crossing through will put the hunter in a narrow, ravine-like valley filled with fog. A great place for luring dinosaurs.

Heading east from the beachhead will take the hunter to a foggy mountain maze, which quickly becomes a trap for unwary hunters.

In the southeasternmost part of the island is the infamous Fort Ciskin. Located between two mountains, Fort Ciskin is surrounded by a "Dinosaur Wall", which lies in ruins from the fury of a T-Rex. The small huts inside the fort are great for hiding, making Fort Ciskin one of the most interesting places to hunt. The in-game description mistakenly states that it is on the southwestern part of the island. The huts can be entered by smaller dinosaurs and larger dinosaurs can simply clip through their walls to kill the hunter which means that they are not a safe zone. The precise history of this colony is unknown, including the nature of its demise. The residents could have evacuated the settlement the moment the tyrannosaur struck them, or perhaps the colony remained for a short period after the attack, but didn't bother to repair the wall, and thus would have been quickly picked off by other dinosaurs. Fort Ciskin was built by DinoHunt Corp. on FMM UV-32 for colonization or to set up a post like on "Delphaeus Hills".

To the northeast lies the infamous Stonehenge, a parallel to the one found on Earth, on a plateau overlooking a beach.