From Carnivores Wiki
(Redirected from Gadget)
Jump to: navigation, search 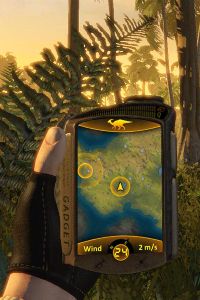 M.I.S.T. using the Dinosaur Decoy to locate a Parasaurolophus.

The M.I.S.T. device is handheld, similar to a GPS, and is very lightweight. When held, its large screen faces the player, showing the area map . The map can be outfitted with the Dinosaur Decoy and/or the radar .

Above the map are two guages, an orange one with an eye at the end and a yellow one with an ear at the end. These guages represent a dinosaur's sight and hearing, respectively. When a dinosaur can see the player, the eye will glow and the guage will begin to fill. If the player crouches or finds cover, the guage will begin to empty. Similarly, if the player stops walking when the yellow guage lights up, it will empty as well. When used in conjunction with the beeper , M.I.S.T. will begin beeping when these guages begin to fill.

Underneath the map is a wind indicator and compass. The arrow showing the wind direction will blink red when a dinosaur can smell the player.

M.I.S.T. can also be used as binoculars and a rangefinder, which, when pointed at a dinosaur, will show a dinosaur's name, weight, and distance.

At the very bottom of the M.I.S.T. device are two icons, the left of a trumpet (which represents the dinosaur decoy) and the right of the dropship. In the middle of these two is a circular panel that normally shows the "action" button. If the button is used for the dinosaur decoy, it will begin counting down with a 30 second timer. The same happens if the dropship is summoned. Note that if either device is counting down, the other can still be used as long as it is ready.