﻿In real life, Gallimimus was considerably larger than it is in the Carnivores series. Gallimimus can be easily confused with Velociraptor or Coelophysis, which can result in wasted ammo or an unexpected death. 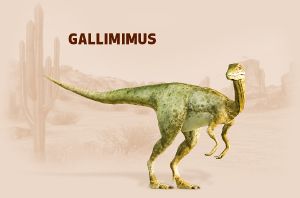 Gallimimus returns as an ambient dinosaur, along with its relative Pelecanimimus. Gallimimus is now light green, which blends in quite well with most forested environments. If a hunter chooses to down a Gallimimus, the reward is 3 gems.