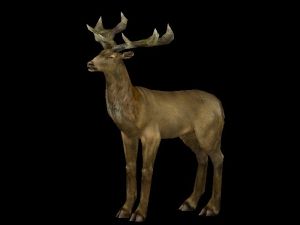 The giant deer (also known as the Irish Elk or Megaloceros) was one of the largest members of the deer family. Its massive antlers could span 12 feet across, and could have been used for scraping away snow, or defending itself. It is a pointable animal in Carnivores Ice Age and Carnivores: Ice Age.

The giant deer is available to hunt in Carnivores Ice Age after the player earns 100 credits. It is normally peaceful, but incorrectly stated as "not dangerous". At close range, the giant deer will gore the player with its huge antlers and shake him violently like a rag doll. It is also commonly seen while not being hunted. It is also one of the weakest creatures in the game, capable of being brought down with a close shot of the X-Bow, Shotgun, or DB Shotgun. Its call sounds sound like the Earth's American moose or elk.

In the mobile version, the giant deer is named by its genus, Megaloceros.