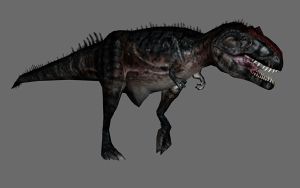 The Giganotosaurus is one of the largest carnivorous dinosaurs ever to walk the FMM UV-32. It is featured in Carnivores Cityscape.

Giganotosaurus means "Giant Southern Lizard", since its earth counterpart's fossils can be found in Argentina. Its size can be compared with the Tyrannosaurus from the original games. They are rather slow due to their large size, yet their size makes them very strong, so they are seemingly invincible to most weapons. They can kill agents simply by treading on them. Their closest relative is the Allosaurus, which surprisingly is a lot smaller than this titan. Giganotosaurus, like most animals on FMM UV-32, are found to be mainly solitary, but they may join in unorganized packs to kill the player. Their coloration and appearances leads to an idea that it may have been primarily a nocturnal carnivore. 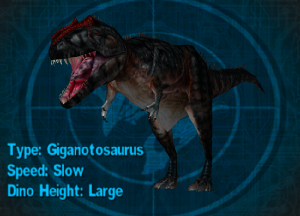 The Giganotosaurus made its first debut in Carnivores Cityscape, where it can be an enemy in the Agent campaign and a playable character in the dinosaur campaign. Giganotosaurus is not encountered until the slums, where one is hiding behind a tanker truck. After that, they run rampant through the slums, especially the DinoHunt Corp. Chemical Complex. They are very slow, but are extremely tough to kill, requiring at least 5 direct hits from the grenade launcher to kill. It is only playable for one level in the dinosaur campaign, the last level. However, in the next to last level of the dinosaur campaign, the player can find the dead corpse of one at the Chemical Complex. It also appears on the game art for the main menu.

The Giganotosaurus is well known for being apart of the Crater City cityscape incident where a spacecraft that was carrying cryogenically-frozen dinosaurs from FMM-UV 32 crashed into the wilderness of Crater City, in which the the dinosaurs escaped and infested the area.