From Carnivores Wiki
(Redirected from Glitches)
Jump to: navigation, search

This is a building list of currently recognized glitches in the Carnivores series. It should be noted that most one time only glitches happen due to memory leaks. Action Forms did not code certain parts of the engine properly and it can result from anything such as random bugs to crashing the player's computer. Memory Leaks can also hide other bugs in the game. If these memory leaks are removed, the bugs will appear again.

Sometimes, you will be able to see through objects such as mountains and corpses. A possible cause could be game lag, or model problems.

Jumping inside an animal in Observer Mode will result in an extremely high jump.

Sometimes, the Trophy Room will not show the weapons you killed the animal with on the trophy's data.

Hunters will fall through cave ceilings even though ammunition and possibly animals can't. Apparently cave roofs were programmed without Hunter Collision but with Ammunition and Animal Collision. Also, the map displays the cave floor rather than the cave roof.

Walking through a small, enclosed area such as a canyon will make the vertical areas of land move as if it were liquid.

Certain slopes will make animals that walk on it loop its walking animation while remaining in place until an exterior event such as a gunshot changes the animal's current state.

Note: This glitch only occurs in the IOS version, not the Android one.

If you are on top of a steep mountain (so steep it's only possible to get up there via Relocate) and a carnivore is trying to kill you, their legs will "go hyper" in their attempt to climb the mountain. This is the most noticeable with the Tyrannosaurus. It continues even if the game is paused.

Rarely, a Tyrannosaurus may be floating above the air near a water source. However, it still has the ability to kill you.

In Observer Mode, Amargasaurs can detect the Hunter at its normal range, as opposed to all of the other herbivores' close Observer Mode detection range.

If a Tyrannosaurus is big enough, it may be able to enter Mount Ravan's volcano.

How to reproduce: First, you relocate to directly south of the volcano. Then, in the five seconds of preparation, shoot a large T-Rex (15t + recommended). When you relocate there, stand on the volcano and wait for the T-Rex to come. When it does, it should get into the lava.

Possible Explanation: The volcano might have been programmed with an invisible wall to prevent animals only from entering. However, since large T-Rexes have a lot of climbing power, they might be able to get over the wall (see Hyper Leg Glitch). 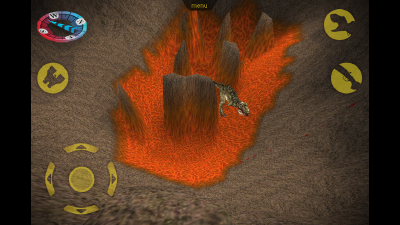 Amargasaurs have significantly lower hearing than what you will imagine "Average Hearing" to be. This may be an oversite by the developers.

Herbivores can occasionally spawn underwater. This makes them impossible to kill, as you cannot shoot through water. If you swim too close to one, it will run away, occasionally running off a map.

If you relocate onto a mountain then lure a large Ceratosaurus to you, there's a chance that it will walk up the mountain with absolutely unrealistic ease, while staying horizontal.

When an injured T-rex is trying to get you from the other side of the Mount Ravan Volcano, its blood trails may float in mid-air.

This may not be a glitch.

When herbivores are running away from you, there is a chance that they will U-turn and run towards you, often going very close to you, in the opposite direction from that of its first escaping attempt.

Possible Explanation: The dinosaur may have encountered an obstacle in their path and, instead of trying to run through it all day, turn around and find a different route to flee.

Note: This glitch is unconfirmed.

The Disappearing Ambient Corpse Glitch can be reproduced by either having an Ambient animal die in the water or have one that has only one health point and walks on the ground (Gallimimus, Moschops and Pig) leave a blood trail by a long distance Shotgun or DB Shotgun. Both methods involve the animal doing something that it wasn't programmed to do, so that might explain the glitch.

If the hunter is separated by a carnivore with an "Attack" animation on only the y-axis (i.e. it looks like the two are together from the map but actually aren't), the carnivore may play this animation over and over again. This can create amusing results with the Hunter observing carnivores seemingly jumping around at random.

Dinosaurs affected by the Noisy Carnivore Glitch have a small chance to jump absurdly high and kill the hunter.

From certain angles, pointing the camara at a brachiosaurus's head and neck area while upright (not eating) will cause the dinosaur to disappear.

The water in the Ice Pits in Dry Nodus Lake will sometimes disappear and will not reappear until the hunter walks a few metres. This glitch does not exist in the PC version.

This glitch is when the Yeti will spawn under water and act the way it does on land, except that it will flee when it hears the player (noise like gunshot), and won't come out of the water, making it completely impossible to kill.

Dinosaurs, expecially Nanotyrannus, will often "jump" several meters straight up while standing in place. This is unexplained, but probably due to a physics bug.