Hyaenodon is a pointable animal in Carnivores: Ice Age.[1] Hyaenodon is the type genus of the family Hyaenodontidae, a group of extinct carnivorous creodont mammals. 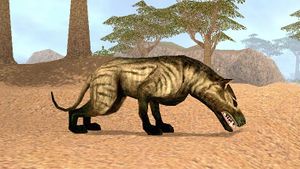 Tatem Games announced on their Facebook page on July 19, 2013 that they were adding Hyaenodon[2] to the game in addition to Indricotherium[3] in 5-7 days. Instead, they were added much later, on November 26, 2013.

After earning 400 credits, the Hyaenodon can be selected. In game, Hyaenodon is a dangerous and stealthy predator. It is very similar to the wolf : prowling around the land while snarling and occasionally howling for others of its kind. It will sometimes stop to sniff the ground, possibly for the scent of a prey item. Before the major 2016 update, Hyaenodon was a very skittish animal, who would run from the hunter then chase after him. However, the update has made the carnivore more aggressive as described, earning its label as a very dangerous predator. With it's keen senses that allow it to detect potential threats and prey, It will flee if the hunter is sensed at a far distance, but it will give chase if it detects the hunter at a medium to close range distance. If Hyaenodon catches the hunter, it will pin its prey to the ground and rip it to pieces. Caution and stealth must be used when hunting Hyaenodon.

Hyaenodon, like most predatory mammals of FMM UV-32 , is quadrupedal, and covered in thin, coarse hair that keeps it warm in its icy environment. Hyaenodon has a very large skull compared to its body size, and a bone-crushing bite as well. Its snout is black, while its hide is light brown with darker brown stripes covering its body up to the neck. The legs are a dark brown, before fading into the body's shade around the knee This kind of coloration helps the beast blend in exceptionally well in dry areas like Ravaren's Bridge. The Hyaenadon's call is a loud howl that is much deeper than that of the wolf, and sounds almost exactly like a modern hyena. A skillful hunter will know to listen when hunting Hyaenodon, for the creature will almost always be heard before it is seen.