The Lambeosaurus was a huge hadrosaurid with a very unique head crest that distinguished it from other hadrosaurs. 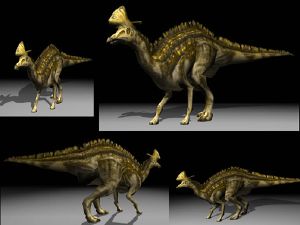 In Primal Prey, Lambeosaurus is a herd dwelling herbivore. Its herds are usually the largest in the game, and it can almost always be found with another animal. A Lambeosaurus can weigh anywhere between 15,500 and 16,500 lbs, making it the heaviest dinosaur in the game. 16,300 lbs will earn a star in the trophy room.