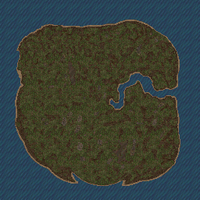 The area map for "The Woods of Turan Choks", the first area in Carnivores.

A map is some form of print, either on paper or digital, that shows an area with its landmarks, and is featured as a non-optional accessory in Carnivores, Carnivores 2, Carnivores Ice Age, Carnivores: Dinosaur Hunter, Carnivores: Ice Age and Carnivores Cityscape.

In the Carnivores games other than Cityscape, the map, which shows the hunter's location as a colored dot surrounded by a green circle, is brought up by pressing Tab ↹ (or by tapping the Wind Indicator and Compass in Carnivores: Dinosaur Hunter and Carnivores: Ice Age), and can be viewed underwater, but attempting to wield a weapon or use the binoculars will automatically disable it. The map can be made more useful by selecting the radar accessory, which shows the locations of the animal species currently being hunted, but selecting it deducts 30% of the total credits earned during the hunt, and it doesn't show the locations of animals not being hunted. When the night option is selected the map gains a green colour. This does make it very hard to distinguish where everthing is. Only the island's outling can be seen.

The map when playing as the agent.

The map when playing as a dinosaur.

In Carnivores Cityscape, the map is an accessory available whether playing as the agent or a dinosaur.

Unlike in the Action Forms/Tatem Games-developed games, the map in Cityscape does not show the enemy dinosaurs or agents on the mission. Instead, it shows the player's current location (marked by a yellow agent or dinosaur on the map, depending on which is being played) and their destination (marked by a green "X"). Furthermore, the map is colored blue when playing as the agent, and red when playing as a dinosaur.