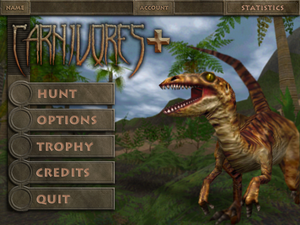 Man menu of Carnivores+, which is a modified version of the Carnivores main menu featuring Velociraptor.

Carnivores+ is a partial-conversion mod for Carnivores 2, intended as the spiritual successor to the discontinued Carnivores Reloaded. It focuses on recreating the gameplay and atmosphere of Carnivores in its sequel's superior engine, as well as expanding the original Carnivores areas and adding new assets fitting the Carnivores aesthetic.

The mod is currently undergoing active development, with the first playable Beta version released on October 12, 2017.

The gameplay of Carnivores+ is mostly identical to that of Carnivores 2, allowing for the selection of multiple dinosaurs, weapons and items per hunting session. It does, however, also remove the limited health from huntable animals and re-introduces the reliance on target zones, which were major gameplay elements in Carnivores absent from most sequels and mods.