Nanotyrannus was a average-sized theropod dinosaur that is possibly synonymous with Tyrannosaurus rex.

The "Nanotyrannus" meaning "Dwarf Tyrant" is the closest known relatives to one of the most feared dinosaurs on FMM UV-32, the Tyrannosaurus. The Nanotyrannus is decently fast, and, like all carnivorous dinosaurs, using its teeth and claws to attack with being just above the Coelophysus and Oviraptor for example, in terms of strength. The "Nanotyrannus" is the equivlant to a light attack vehicle. It is able to take two blasts from the X-Rifle or Grenade Launcher directly before falling. It can also be noted that the "Nanotyrannus" sports hides similar to that of a Jaguar, perhaps as camoflage to sneak up on their prey.

Nanotyrannus became infamous after being accidentally released on Earth during the Crater City Incident.

In Carnivores Cityscape, The Nanotyrannus is first encountered as a boss at the end of the first level. After that, they are encountered all throughout the city, but there are less of them in the sewers and subway areas. It is the second dinosaur you get to play as as well. The "Nanotyrannus" can take out agents with a single right mouse button slash. It is also one of the only dinosaurs in the dinosaur campaign to encounter live dinosaurs during one of its missions (which are Oviraptor). 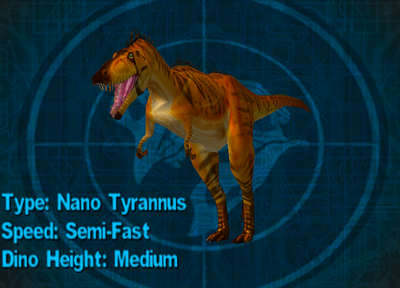