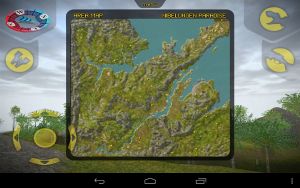 One of the first released images, showing off the unique terrain.

"Nibelungen Paradise" is the seventh area in Carnivores: Dinosaur Hunter, and the first area exclusive to the game. It is currently the most expensive island to hunt on, costing 500 points. The island was released in the February 21, 2013 Android update, along with four new dinosaurs and a redesigned menu format.[1][2]

An area of contrasts. Look in one direction and see a beautiful sandy bay. Look in another - and see high mountains which form an almost closed circle. Clouds gather in this circle and make visibility poor so use all your senses to track down the animals. Advanced difficulty

On grid coordinates D7, an ominous monolith emitting a low humming noise can be found in the shallow water between the tiny island mountains. This is an Easter egg referencing the monolith from the science fiction film 2001: A Space Odyssey.