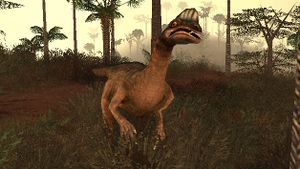 The Oviraptor was an odd theropod dinosaur. Oviraptor was originally thought to be an egg eater, because some of its first remains were found on top of a nest of presumed Protoceratops eggs. It was later discovered that the eggs were the Oviraptor's, and it was just guarding its nest.

It is believed that Oviraptor is a dangerous omnivore, possessing a very powerful beak capable of crushing egg shells, shellfish, and the skulls of smaller animals. Unlike Earth's Oviraptor, the FMM UV-32 variants lives up to it's name. As of the latest update, Oviraptor are dull colored, most of their body being a brown-ish color with a colorful blue crest and a darker blue stripe running down it's back with it branching out into smaller stripes.

Comparison of the appearance of Oviraptor in Carnivores Cityscape (left) and Carnivores: Dinosaur Hunter (right).

Part of the June 20, 2012 update for Carnivores: Dinosaur Hunter, the Oviraptor is extremely dangerous. Tatem Games has stated that this Oviraptor is a slight nod to the Carnivores Cityscape one and hopes that this one is more successful than its Cityscape counterpart. According to the Dinopedia, the Oviraptor has a very powerful beak capable of crushing eggshells, shellfish, and the skulls of smaller animals. Both sexes are known to be good parents, nurturing and protecting their eggs.