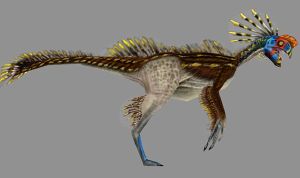 The Oviraptor is one of the few feathered dinosaurs on the planet. It is featured in Carnivores Cityscape.

The Oviraptor meaning "Egg Thief" uses its powerful beak to eat smaller animals and perhaps eggs. The dinosaur is covered in tan and brown feathers on its body, legs, and tail. The feathers are yellow on the neck and back, and it has a red crest on its head. The Oviraptor has scaly blue legs, and a blue and red head with an yellow stripe surrounding its beak. Its closest relatives would include the Oviraptor and the Gigantoraptor of the Central Sector. Its appearance happen to resemble the terror birds, Titanis and Diatryma in the Arctic Sector, perhaps as the result of convergent evolution. It's most well known as being one of the invasive species of the Crater City Cityscape Incident.

In Carnivores Cityscape, they're first found by the agent on the ship near the reactor where it is warm and food is abundant. Later in the game, they can be encountered in the Aqueducts and the power generator room of Crater City. Even later in the Agent's campaign still, they can be encountered at the L Train tracks and subway areas. Especially while Norton is repairing the train and in the last area at the Chemical Complex, being attracted to the Pheromones stored by DinoHunt Corp. there. Usually, a Single direct Grenade Launcher or X-Rifle Blast are enough to bring one down and severely damage others nearby.

In the Dinosaur Campaign, it is the third dinosaur you get to play as. It is also the only dinosaur the player can encounter as a dinosaur outside of ambient animals. They appear in a few places in the sewers. There's also an invincible one hidden in Norton's nightmare that cannot be found normally but it can occasionally be heard. It is possible to get it to appear with the Ghost Cheat however. It takes about two right mouse click slashes to kill an agent as an Oviraptor. 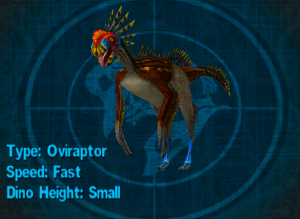