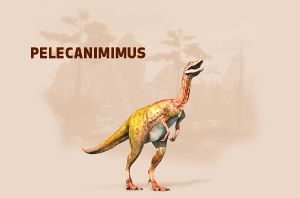 Comparitavely, Pelecanimimus is a rather tiny dinosaur of FMM UV-32 . It is roughly 7 feet long and about 3.5 feet high, dwarfing it in the shadow of the larger dinosaurs. It has a very light, greenish-yellow tail and body, with a pink head, arms and feet. Pelecanimimus is not adept at camouflage, and relies on its size and speed to avoid predators. Although Pelecanimimus is in a family of toothless, beaked dinosaurs, it actually has 200 teeth, more than many other dinosaurs. It is presumably an omnivore, so it probably did not use these teeth to tear large prey to pieces.

In Carnivores: Dinosaur Hunter HD, Pelecanimimus scurries around its environment, similar to Gallimimus. It is not dangerous, and not easily mistaken for any other dinosaurs, so it is usually left alone by hunters. If a hunter chooses to down a Pelecanimimus, however, he will be rewarded 1 gem per kill.