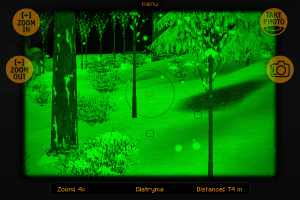 The view through the Photo Camera.

The Photo Camera can be selected if you hold the Gun Button (as if it were a gun). Once the camera is selected, you will see your surroundings with a thick black border which probably was meant to represent the camera itself. There are 2 "new" buttons, a Zoom button and a Take Photo button. The camera can zoom up to 4x the normal zoom. The Hunter can take photos by using the Take Photo button. To walk, simply drag your finger where you want to go. Photos can be viewed in the Trophy Room.