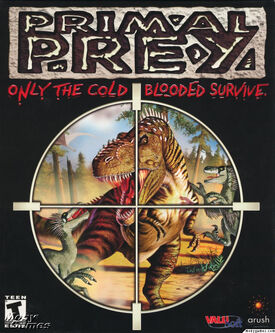 Primal Prey is a hunting game released by Arush Games and Sunstorm Interactive, where hunters can travel back in time from the year 2090 A.D. to hunt dinosaurs using time portals.

The game had very realistic dinosaurs but had less diversity because of only one area to hunt in and a very limited trophy room. It has problems running under Windows XP.

The game contains four episodes, with six different missions in each that force the player to either capture or kill the specified dinosaurs. The danger and size of the dinosaurs increase as the player gets to higher sections and levels. Any level can be played at any time, since there is no chronological order to them. Like the Carnivores games, the player chooses available weapons and equipment to hunt nine animals.

Time travel is now a reality. After a rigorous battery of physical and mental testing only a handful of civilians are allowed to access to the government controlled time portals. Public and private groups often seek out these chosen civilians for special missions. You are one of the chosen few Time Travelers.

The government has very strict regulations about where and when Time Travelers can go. Although you've been given clearance to travel, it takes a substantial ammount of money to buy your travel time. A portal to the Cretaceous period has been made available to you. With some private funding you are able to purchase the time necessary to take on a few of these specialized missions. There's only a small ammount of money left over to purchase a tranquilizing pistol. Armed only with your pistol and hunting skill you pick a mission. The time portal opens and you step in.

In Primal Prey, to succeed and stay alive, you must learn the dinosaurs' world. You must also learn the abilities and limitations of each of the weapons available to you, as they will be the tools that keep you alive. This is hunting in a very primitive setting, but also hunting with very advanced technology. That makes for a volatile mix.

Make sure you know your mission objective, your weapons, your limitations, but most of all... your prey... your Primal Prey.

The game has been met with mixed to negative reviews. Critics agree that Primal Prey features a wide variety of weapons and equipment, along with a nice array of unique dinosaurs. The graphics were criticized for being too foggy and not as good as Carnivores, but the dinosaurs still look realistic and occasionally interact with each other. However, the game is basically a spin-off of Carnivores, just with different dinosaurs that often glitch (running in circles, using other dinosaurs' cries, walking at the bottom of a pond, etc.). And although they are all from Cretaceous North America, they range from 120-65 million years in age, so are not all from the exact same time. There is no real plot, just the player grabbing some gear and shooting dinosaurs. With over-priced equipment and under-paying missions, it can take quite awhile to obtain any effective hunting gear. That with the fact that weapons can be lost if the player is killed during a hunt can lead to frustrating gameplay. With only one small location to hunt, which is constantly plagued by fog, rain, or other view obstructing elements, hunting can get old quick. Also, players have complained that the dinosaurs in the game are hard to shoot at or hit, probably because of the shoddy gunplay.