Pteranodon is a massive flying reptile known as a pterosaur – not a dinosaur, but a close relative. Pteranodon's wing-span is also longer and larger than that of any known living bird. Despite the its enormous qualities, the animal is quite skittish, often vocalizing its distress when the player is near. Pteranodon has a long head crest that is probably used to help counter and balance the weight of its massive beak, which it used to capture fish and other aquatic animals. 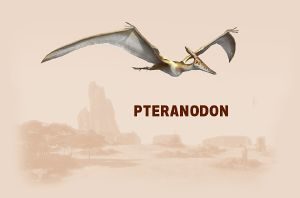