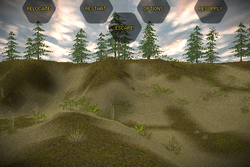 The Relocate icon, in the top left. 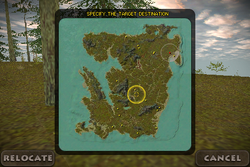 To relocate, press the menu button on the top of the screen, which will pause the game and display a small menu. The Relocate button is in the top left corner.

When the button is tapped, it displays the overlay shown on the left. This overlay shows the area map and text above it stating "Specify the target destination". The chosen destination is indicated by a yellow circle the size of the one found on the radar. To actually relocate, the Relocate button is then pressed again. 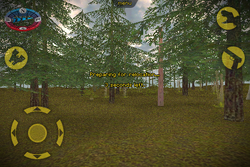 Once Relocate has been pressed, there is a four second interval stating "Preparing for relocation". Once the countdown completes, the hunter moves to the chosen location.

Relocating has a one-minute cooldown period between uses.

As part of the February 21, 2013 update for Android (likely to be released for other devices at a later date) the Relocate feature has been redesigned:

As part of the September 11, 2015 update for iOS (likely to be released for other devices at a later date) the Relocate feature has been redesigned.

The option to relocate no longer appears in the drop-down menu bar, nor does the Resupply feature. The option to relocate is instead given each time the map is brought up. While viewing the map, simply choose a location and press the "Relocate" button to do so. The screen will then fade out as the relocation timer counts down.