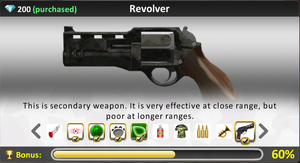 A similar revolver also makes an appearance in the mobile ports. Unlike the revolver from the HD version, this revolver has a five shot capacity, with a total ammo count of ten and a fairly staggering cost of 500 credits in the iOS version of Carnivores: Dinosaur Hunter; the Android version costs 2000 credits and its bullets costing 95. The revolver can dish out considerable damage (rivaling the X-bow) at short to medium range, though its accuracy suffers at greater ranges. Its damage, coupled with a fairly admirable fire rate, makes the revolver excellent at eliminating charging predators, similar to its HD counterpart. Interestingly, the revolver is the only weapon in the mobile ports to have muzzle flash, and one of only two weapons (the other being the DB shotgun) that reloads before its total ammo supply is completely expended.