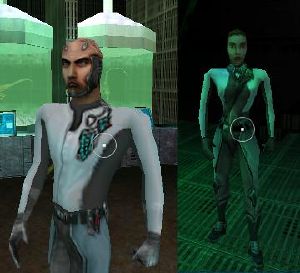 The scientists aboard DinoCorp VII.

A scientist is one who (generally) uses the scientific method to gain knowledge. In Carnivores Cityscape, there are four scientists that must be rescued in various levels. Rescuing the scientists will end their respective levels.

The next pair of scientists (called engineers in the game) are located in the sewers. The agent must race the rising floodwaters to an elevator in the back of the sewers. Once there, the agent gets the scientists on to the elevator, and activates it, sending them up to the surface. Once they arrive, they can be heard being devoured by a Giganotosaurus.

The scientists are incredibly weak, one shot from any weapon or one hit from any dinosaur will kill them and the mission will fail.