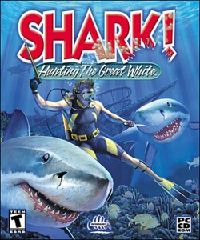 Shark! Hunting the Great White is a hunting game published by WizardWorks Software. It replaced dinosaurs with sharks and was developed by Sunstorm Interactive, the developers of Primal Prey. Despite its name featuring just the great white, several other species were featured to hunt. There are areas ranging from the dark and murky to the clear and less murky.

The player can choose which diving suit/flippers to wear, which oxygen tank to use and what speargun/bangstick to use when they are about to start hunting the sharks. There is a Career Mode in the game where the player has to kill sharks in order to pass to the next mission and unlock new equipment. There are also secrets (1 secret) in almost all of the missions in the Career Mode and if the player finds them, additional equipment will be unlocked.