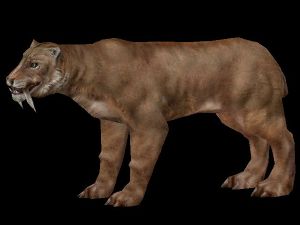 The Smilodon, perhaps the best-known saber-toothed cat (specifically of the subfamily Machairodontinae), was a large, predatory cat that roamed North and South America. Even though it is well known for its huge fangs, it probably only used these to sever important arteries once its prey was subdued, and not in fierce combat.

The Smilodon is unlocked in Carnivores Ice Age after the player earns 250 points. It is the most aggressive carnivore in the game, and rightly described as "extremely dangerous".

The Smilodon will pounce at the player similar to an Allosaurus or similar carnivore from Carnivores 2. However, it is much closer to the Spinosaurus in terms of animation behavior, due to it using idle animations.

However, it cannot slide to make sharp turns, like the small carnivorous dinosaurs above and Diatryma can. To turn around, it must make a U-turn. It shares this trait with the wolf. When the hunter is killed by it, the Smilodon will slam the hunter's body repeatedly on the ground with his right arm in its mouth. It also shares this type of killing animation with the bear. Although often rarely encountered, the Smilodon will spawn even while not hunting for it, making it a bigger threat to the hunter than it already is. The level of aggressiveness it has towards the hunter ensures this. Its dinosaur call is similar to that of modern lions or tigers.

In the mobile version, it is nowhere near as aggressive as its PC counterpart. Thus, it is falsely identified as the most aggressive carnivore in the game, incorrectly described as "extremely dangerous" (it is no more dangerous than the Wolf, which is labeled as "Very dangerous.").