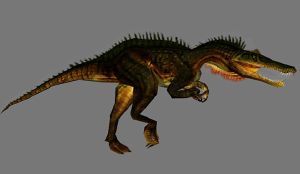 Suchomimus was a large theropod dinosaur very similar to Spinosaurus, minus the sail. Suchomimus appears as a dangerous carnivore in Carnivores Cityscape.

Suchomimus means "crocodile mimic" fitting since the creature sports characteristic similar to that of a crocodile. During the Crater City Incident, it can be found in the sewers and around water, so it's assumed that it has a similar life style at FMM UV-32. Its crocodile-like jaws suggest it may primarily eat fish and other small animals, but may have also been a scavenger. However, during the Crater City Incident, it has shown to be a man eater. Its characteristics during growth is unique as unlike most dinosaurs, the creature mainly sports two different scale patterns. The juveniles sports green and red-orange stripes while the adult counterpart sports a green crocodile-like texture. Their closest relatives includes the Spinosaurus with one of the most defining differences between the two being the sail.

During the Agent's campaign, Suchomimus is first encountered in the sewers. The juveniles here though are most commonly encountered on the Subway ride stage. They usually take about a single X-Rifle or Grenade Launcher blast to kill. The juveniles do less damage than the adults, but are much faster and generally attack in larger groups. The adult Suchomimus is bigger and more dangerous than the juvenile. However, it moves much slower which potentially makes it less dangerous in some regards. The bite however is dangerous for the player so keeping your distance is top priority with the adult. As an Agent, about three direct X-Rifle shots or four Grenade Launcher blasts are enough to kill it. While playing as it in the dinosaur campaign, it takes about a single right mouse slash to kill an Agent. 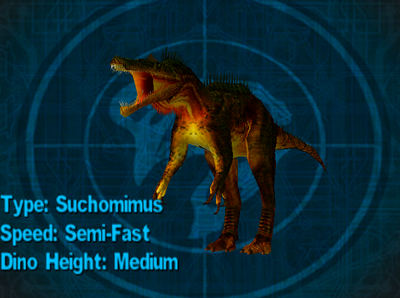 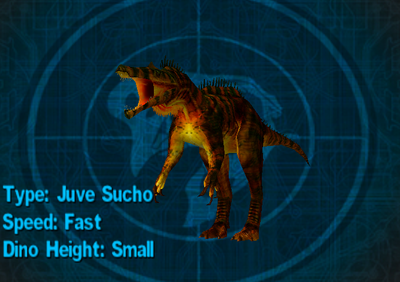