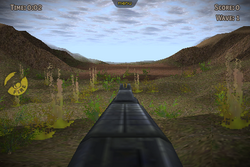 A screenshot showing the hunter in the canyon with the shotgun.

Survival Mode or Survive Mode is a game mode introduced (and exclusive to) Carnivores: Dinosaur Hunter, and likely to be released again to Carnivores: Ice Age. This is a type of training experience developed by DinoHunt Corp.

The gameplay involves the hunter, rooted in a canyon in Mount Ravan. With unending waves of charging animals, and only armed with a shotgun and infinite ammo, gameplay can be difficult, but easy to get the hang of.

The hunter gains points for each downed animal, with the number of points depending on the species of animal. Additional points are rewarded for the distance of each kill In the end, even more extra points are awarded for the accuracy of each shot.