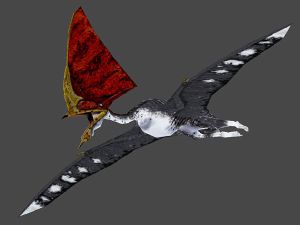 The Tapejara was a prehistoric flying reptile, much like the Pteranodon.

In Carnivores Cityscape, Tapejara fly around the skies, and can be shot, but pose no threat. They nest in the power generator. It is about the same size as Pteranodon and larger than Dimorphodon. They are found in almost every level. It has the same roll as Pteranodon, Dimorphodon, and Archaeopteryx. Its physical features include a trapezoidal crest, two large wings, and an oddly shaped beak.