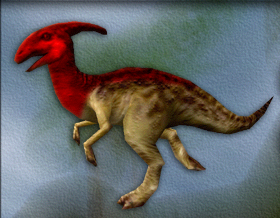 Menu image of Parasaurolophus from Carnivores, with its target zones highlighted in red.

Target zones, also called "weak spots", "weak points", or "mortal spots", are areas on an animal that can be shot to instantly kill or tranquilize the animal, regardless of its health or the weapon's power. Target zones are introduced and mainly used in Carnivores, where all animals have them. They are removed from all animals except the Tyrannosaurus in Carnivores 2, and are not used at all in Carnivores Ice Age, though the engine still supports them.