The Woods of Turan Choks

"The Woods of Turan Choks" is the first area in Carnivores. A mild climate and good range of sight make this a great beginner's map. This was the first island explored on the new planet. The island is named after Turan Choks, the captain of the science vessel which discovered the planet FMM UV-32 in 2190 AD. Turan Choks is a hilly wooded area populated by a variety of dinosaurs. It is a squarish island mostly devoid of geographic features except for a single river-like inlet on its east side.

"The Woods of Turan Choks" is mostly featureless, but it does have a single inlet and multiple mud pools.

In the western portion of the island, there exists a small inlet that flows through a small group of bordering hills. Due to the inlet, small coastal plants found growing on the shore of the island, grow farther away from the shore than normal.

Two mud pools exist on the island, one in the northwest and one in the southeast. Full of murky water, these pools serve no purpose for the hunter.

The island's south shore appears to be a second body of water that was sealed with land. However, there is now almost nothing left as proof of its existence apart from two extensions of land that look like they surrounded a bay. 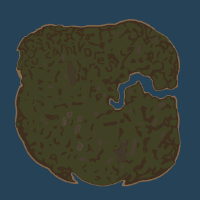 An image taken from within AltEditor II, clearly showing the word "Carnivores" spelled out.

The area's textures are arranged such that in the northwest of the island, the word "Carnivores" is spelled out. This can be seen in-game on the map, but is easier to see with a map editor such as AltEditor II.