Titanis is a large flightless bird featured in Carnivores: Ice Age. Introduced on April 19, 2014; it marks the second hostile ambient animal introduced in the Carnivores series after the Iguanodon in Carnivores: Dinosaur Hunter. 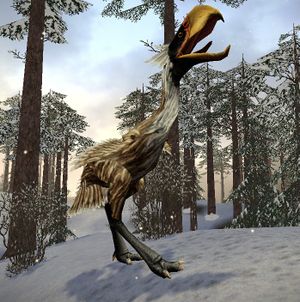 In Carnivores: Ice Age, the Titanis is a hostile ambient animal that wanders about the map much like a regular pointable animal; the only differences being that Titanis is an ambient creature that can deliver points and can appear in the trophy room, where as pigs and Archaeopteryx can not. Titanis is marked on the area map with a "?" and can be killed like any other creature. It should be noted however that Titanis is still deemed carnivorous and will kill the hunter if he approaches or attempts to bring it down.

Anywhere between one and three Titanis can be found roaming an island, although the creatures are not usually found congregating together. The Titanis seems to be devoted to roaming only a small expanse of land, pacing around its designated area as if guarding its territory. Occasionally, it will stop to groom itself, much like a modern-day bird. The Titanis will also stop and snap its sharp beak, perhaps as an intimidation tactic. If this does not scare away intruders from its territory, the Titanis will unleash its unearthly screech in attempt to keep its area secure. If a startled at a distance, the giant bird may retreat a short distance, although never too far away from its territory. However, if wounded, the Titanis will charge no matter the distance between it and its attacker. The Titanis is not particularly fast compared to other polar predators of the planet; but if it manages to catch up to its target, it will use its enormous beak as an axe and slice into its target and procede to devour it. Like Diatryma, Hyaenodon, and Andrewsarchus, it leaps at the hunter before it attacks.

Titanis was added as a selectable animal on August 7, 2014 for Android and August 14, 2014 for iOS. As a huntable animal selectable from the menu, Titanis exhibits many new traits. It is now a pack hunter, and uses the same pack hunting mechanics as the Coelophysis, an animal from the planet's warmer climates. The Titanis is now considerably faster, charging at its prey using a lightning quick "zigzag" maneuver, which makes one incredibly hard to kill, let alone an entire pack.

The Titanis is one of two predatory, flightless birds of FMM UV-32 (the other being Diatryma). Unlike the stocky Diatryma, the Titanis is very thin and streamlined, with a very long neck and legs. The bird is covered in tan and brown feathers on its body, legs, and tail. The feathers are white on the neck, and it has a crest of white feathers behind the head. The Titanis has dark grey legs, and a black head with an orange stripe surrounding its bright yellow beak. The enormous beak is Titanis' most intimidating trait. It is large and hooked, perfect for tearing into its prey. The Titanis' call is a loud, terrifying screech, vaguely similar to that of a crow or vulture.