Troodon was a small omnivorous dinosaur whose remains have been found in North America. Troodon is the type species of Troodontidae, the sister clade to Dromaeosauridae within Deinonychosauria, which makes Troodon a relative of Velociraptor, Utahraptor and Archaeopteryx. It has one of the highest known brain size-to-body mass ratios of any dinosaur. Troodon had very large eyes meaning it may possibly have been nocturnal. Troodon is present in Carnivores: Dinosaur Hunter.

Possibly the smartest dinosaur on FMM UV-32, this intimidating bird-like dinosaur can easily outwit both its prey and its predators. Troodon boasts large eyes for spotting prey at any time of day. It is so much larger and fiercer than Earth's species, and as a result is much less fearful of hunters and large dinosaurs. To top it all off, Troodon is incredibly fast and has serrated teeth for ripping into prey. While Earth's species had a hyper-extendable toe with a sickle claw on each foot for stabbing prey, the FMM UV-32 species has a much more reduced digit. It was an omnivore. The Troodon is olive green with a cream underbelly. The back is purple, with light brown stripes blending into it.

Troodon is a small, agile dinosaur introduced in the June 20, 2012 update. Thanks to the animal's large forward-facing eyes, it can spot a hunter or other potential prey from a large distance and see well at night. It is extremely dangerous and will attack the hunter at close range. However, it will flee if it notices the hunter from a distance. Troodon has more health than Velociraptor. 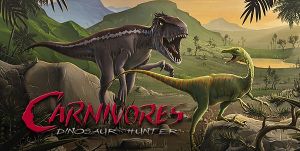